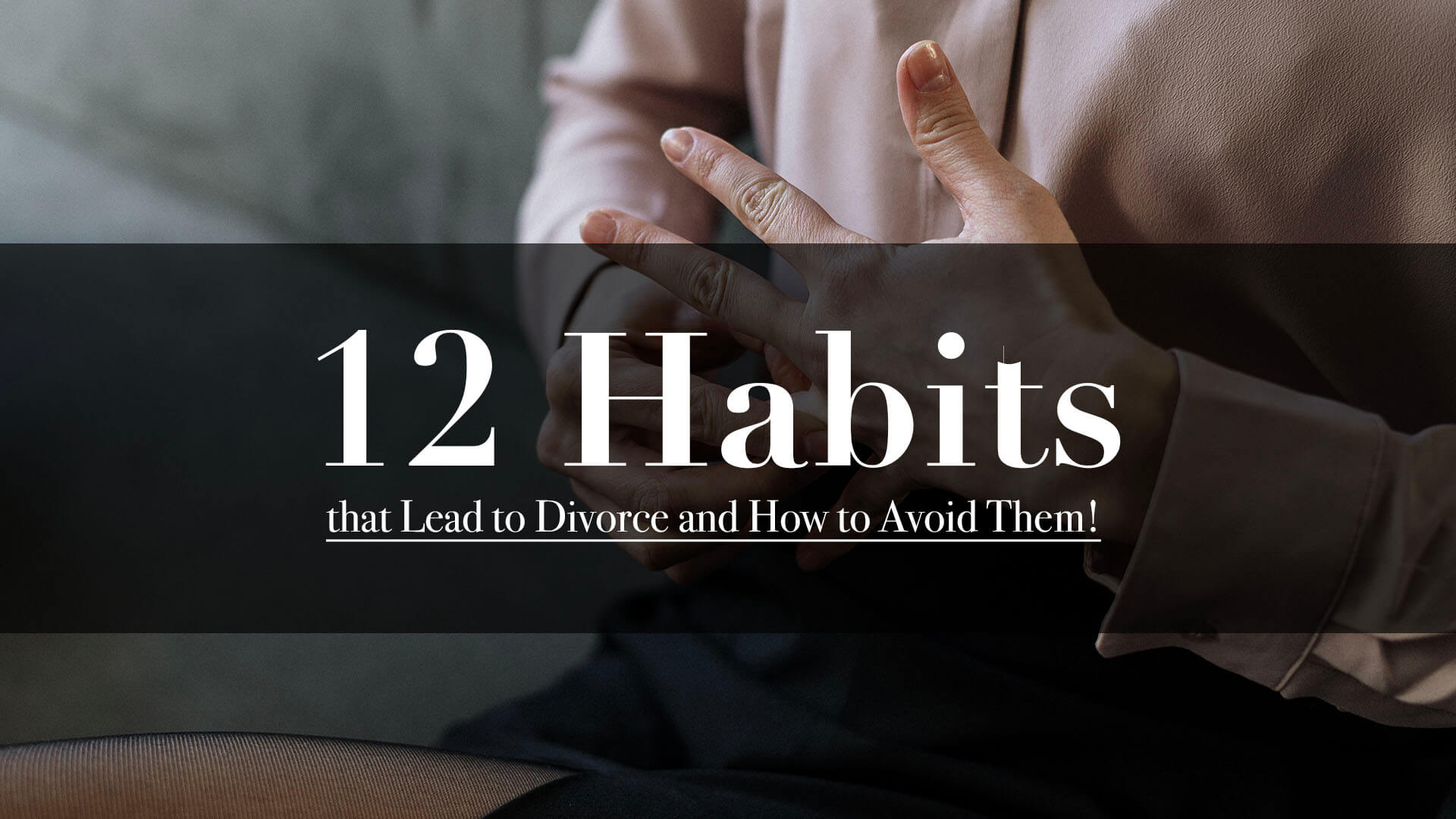 One of the biggest “warning lights” in a marriage is a tone of constant criticism.

When a husband and wife start being each other’s biggest critics instead of the biggest encouragers and when they start focusing only on the negative instead of the positive, it creates a downward spiral that often is one of the habits that lead to divorce.

This is something many couples do as soon as they get married, but they don’t realize they’re just preparing themselves for divorce.

Marriage is about combining; divorce is about dividing.

The more you can share together, the stronger your marriage will be.

Putting the marriage “on hold” while raising kids can lead to divorce.
(Ephesians 5:22-25, NKJV)

This is the reason there’s an epidemic of divorce among couples who have been married for 20 years or more.

Many times, two well-meaning people put so much focus on their kids that they forget to keep investing in the marriage.

Some couples reduce their relationship to a partnership in co-parenting, and when the kids finally grow up, they discover that they have created an empty nest and an empty marriage.

Give your children the gift that comes from seeing your parents in a loving, thriving marriage.

Model the kind of marriage that will make your kids excited to be married someday.

Giving each other your “leftovers” can lead to divorce. (Philippians 2:3, NKJV)

This might be the most common (and one of the most dangerous) habits that lead to divorce on the list.

Some couple have a “cable company marriage”.

Some cable T.V. companies seem to give you their very best deals and service at the beginning of the relationship but then after he “introductory period” ends, they give you as little as possible to still keep you around.

Some married couples were great at giving their best at the beginning of the relationship, but as time goes on, they start giving you the leftovers.

Strive to keep giving your best to each other.

Grow deeper in your love, your respect and your friendship through all the seasons of a good marriage.

This is toxic when it happens, neither spouse is going to have peace or happiness.

When our words or actions cause harm, we need to be quick to admit fault and seek forgiveness.

When your spouse has wronged you, you need to offer grace quickly so that trust can start being rebuilt and there’s no room for bitterness to take root in your heart.

Don’t use past hurts as ammunition in arguments.

Let grace flow freely in your marriage. No marriage can survive without it.

Trusting your “feelings” more than your commitments. (Jeremiah 17:9-10, NKJV)

There are going to be days when you might not “feel” like being married, but feelings are fickle and they were never intended to be our primary advisor in major decisions.

The healthiest couples have discovered that love is a commitment; not just a feeling.

Their commitment to each other perseveres regardless of what they’re feeling.

The strength of that commitment allows them to have a deeper intimacy, a stronger connection and a happier marriage.

This happens when pride replaces thoughtfulness in the relationship.

Our pride can often convince us that we don’t have to answer to anyone, and we should be able to make decisions without consulting anyone.

Pride has been the downfall of so many marriages.

The healthiest couples have learned that EVERY decision they make as individuals will have some level of impact on each other, so they respectfully and thoughtfully consult each other in every decision.

Trying to change each other.

This frustrates both spouses, but doesn’t help either one of them.

When you “try” to change your spouse, you will BOTH end up frustrated.

As you’ve probably learned already, you can’t change each other; you can only love each other.

The only part of the marriage you have the power to change is the part you see when you look in the mirror.

Be willing to change your responses to your spouse’s behavior.

Look for ways to love and serve each other even when you have differences of perspective or preference.

You’ll both probably end up “changing” for the better in the process.

This is the biggest single step toward an eventual divorce.

The healthiest couples have removes the “D-Word” (Divorce) from their vocabularies.

When we threaten divorce or when we silently start fantasizing about life with someone new, we’re ripping apart the foundation of the marriage.

The couples who make it work aren’t the ones who never had a reason to get divorced; they’re simply the ones whose commitment to each other was always bigger than their differences and flaws.

Hiding the fact that you’re married.

This doesn’t necessarily involve sex, but it’s still an act of infidelity.

If you are intentionally hiding your status as a married person or you’re projecting “availability” through flirting, slipping off a wedding ring, acting single around your single friends or at bars, etc., then you’re WAY out of bounds.

Those subtle acts of deceit are in themselves forms of infidelity even if they never lead to a sexual affair.

This is EVERYWHERE, and it’s having a tragic impact on marriages.

When you’re acting out sexual fantasy apart from your spouse, it’s an act of mental infidelity.

All true intimacy and all infidelity begins in the mind; not the bedroom.

If your eyes and your thoughts are wandering away from your spouse, then your heart is going to follow.

Two thousand years ago, Jesus taught that “to look at a woman lustfully is to commit adultery with her in your heart.”

Strive to be mentally monogamous.

Most likely the number one cause of divorce.

We are ALL selfish by nature, but a marriage can only work when we put our selfishness aside and put the needs of our spouse ahead of our own needs.

When BOTH spouses are willingly to selflessly love and serve each other in this way, the marriage will thrive.

The hard part is that YOU must be willing to go first and be selfless even in those moments when he/she is not reciprocating.

Choose to be a thermostat and not a thermometer.

A thermometer always adjusts to the climate in a room, but thermostat CHANGES the climate on the room.

Be the change. You probably have more influence than you think!